I come from a Buick background. I'm a distant relative of R.S. (Sam) McLaughlin who is the recognized name connected to McLaughlin Buick - the Canadian Buick company. Sam's father's (Robert) brother (William) is my great grandfather. My grandfather (Frank) was the foreman in the upholstery shop in Oshawa. He started with the company in 1904, when it was the McLaughlin Carriage Company.

Interestingly enough, my Father (Earle) replaced Sam on the General Motors Board (circ. 1966) through a totally different connection (Banking).

So, when I decided (in 1975) to get an old car, I could hardly drive anything but a McLaughlin. I found a 1929 McLaughlin Buick 29-44 roadster. It was in a barn where it had sat for almost 20 years with a broken rocker arm. It was basically original - having never been painted. I replaced the rocker arm and have since re-done the chrome and rebuilt the engine, brakes, wiring, etc., and anything else that needed rebuilding over the years. But, I have kept it as original as possible while still enjoying it on the road.

I drive it about 2,000 miles a year to various Buick meets in Canada and the US and on the occasional vacation trips.

Our family was still involved with cars up until 2014. At that time my son and I sold a company he started 15 years ago, called AutoShare, which rented cars by-the-hour in downtown Toronto, to the Enterprise Rent-A-Car network 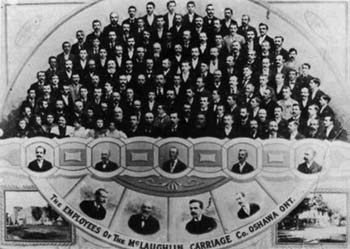 In 1908, Sam. McLaughlin did a deal with Billy Durant, then owner of Buick, whereby Buick would supply the running gear for McLaughlin cars. GM bought the company in the late teens and when the original deal expired, in the mid twenties, the Canadian cars were renamed McLaughlin Buicks.

I have two old postcards inherited from my Grandparents. The first (below left) is the McLaughlin Trimming Room Picnic taken in 1919. The second (below right) shows my Grandfather Frank's as well as his Grandfather, John McLaughlin's homes circa 1913. John was the first of the McLaughlin's in Canada. He came from County Cavan in Ireland and settled in Tyrone, Ontario in 1832.

I first saw my Arrete Red 1929 McLaughlin Buick roadster in 1976 in a barn in Nantel, Quebec, Canada where it had sat for almost 20 years with a broken rocker arm.

The car, a real head-turner in it's day, was purchased new, in 1929 by Craddah Simpson, a bachelor real estate agent who lived in downtown Montréal and parked the car in a public garage.

In 1949, after several years of sitting in the garage unused, the car was found by its second owner, George Stead. George used it to attend McGill University and tour the countryside. He added 50 K to the original 30 K miles. George did normal maintenance and kept the roadster in excellent shape.

In 1957, George broke a rocker arm and put the car in a barn at his summer cottage, intending to fix it. Other things intervened and I first saw the car in that barn, exactly where he'd left it, 19 years earlier.

It was love at first sight. I bought the roadster, had Bob James truck the car to Toronto and set about getting it back on the road.

As I had never changed the oil in any car when I bought the Buick, my learning curve was steep. With the help of several people (the late Gene Auber, the late Bud Oatman and the late Pete Douma), I got it back on the road the following summer and began to drive it to BCA meets – the first being Flint, in 1978.

People who know me, know I really drive this car and have taken it to Atlanta, Indianapolis, Columbus, Chicago, Rochester MN, Batavia NY plus other National and Regional BCA meets.

Since getting it in 1976, I have added 50 K miles, rebuilt the engine, redone the wiring and changed the brakes plus all the minor jobs one has to do to keep an old car running. Originally, it had the optional wire wheels but I saw a picture of the optional disc wheel and like that look. It took 8 years and wheels from USA, Spain and Sweden to piece together the parts to complete the switch-over. The one thing I haven't succumbed to though, is repainting this nice original car ! However, in early 2013, I had to repaint the hood after a carb fire (and also decided to repainted the rumble seat lid).